New Exhibition – Flashes of Memory: Photography during the Holocaust

In January 2018, Yad Vashem inaugurated a new exhibition entitled « Flashes of Memory: Photography during the Holocaust. » The exhibition, housed in the Exhibitions Pavilion of Yad Vashem’s Museum Complex, presents a critical account of visual documentation – photographs and films – created during the Holocaust by German and Jewish photographers, as well as by members of the Allied forces during liberation. The exhibition focuses on the circumstances of the photograph and the worldview of the documenting photographer while emphasizing the unique viewpoint of the Jewish photographers as direct victims of the Holocaust. Displayed throughout this exhibition are some 1,500 photographs and 13 films, as well as original newspaper clippings, albums, diaries, and a number of original cameras from the period. Click here to view a promo for the exhibition. 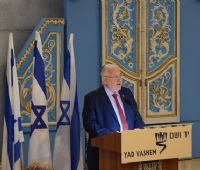 Ahead of International Holocaust Remembrance Day, Yad Vashem Chairman Avner Shalev participated in a special Israeli Government Cabinet meeting dedicated to Holocaust commemoration where he presented the attending ministers and Prime Minister Benjamin Netanayhu with an overview of the current status of international Holocaust commemoration. Shalev’s appearance commenced the myriad commemorative activities in Israel and throughout the world through which Yad Vashem marked the UN-sanctioned International Day of Commemoration in Memory of Victims of the Holocaust. In addition, Yad Vashem hosted members of the international diplomatic community at its annual event, who were addressed by Israel’s President H.E. Mr. Reuven Rivlin and Yad Vashem Chairman Avner Shalev.

Spotlight on the Web

Yad Vashem uploaded a mini-site marking International Holocaust Remembrance Day, featuring a variety of resources for the public to view, share and engage in, including online exhibitions, educational resources and the I Remember Wall. This annual social media campaign is a unique and meaningful opportunity for the public to participate in a commeorative activity to mark International Holocaust Remembrance Day. By joining the IRemember Wall, the participant’s Facebook profile is randomly linked to the name of a Holocaust victim from Yad Vashem’s Central Database of Shoah Victims’ Names. The IRemember Wall was promoted on Facebook, Instagram and Twitter. Some 8,000 people joined the IRemember Wall from 193 different countries.

Over the decades, Yad Vashem has collected thousands of personal letters that reveal the hardships of Jews surviving day by day during the Holocaust. A selection of this correspondence is featured in the third in a series of online exhibitions about last letters sent during the Shoah: « ‘I Left Everyone at Home’: Last Letters from 1943 ». Tragically, many of the letters contain optimistic messages and hope for reunion. These online exhibitions provide rare documentation of the stories of Holocaust victims through their manuscripts, photos, Pages of Testimony that were filled out in their memory, and excerpts of testimony from family members who survived.

The last time 102-year-old Holocaust survivor Eliahu Pietruszka saw his family was in Warsaw. All these years he believed that his entire family had been murdered during the Holocaust. But in November 2017, Eliahu met for the first time with his newly discovered nephew Alexandre, the son of a brother who, unbeknownst to him, had also survived. The emotional meeting took place thanks to information on Pages of Testimony recorded on Yad Vashem’s online Central Database of Shoah Victims’ Names. Alexandre was moved to tears when he saw a prewar family photograph, saying that it was the first time that he had seen a photograph of his grandparents. Alexandre recounted how his father Wolf always thought that he was alone in the world and, like Eliahu, believed that no-one from his family survived the war.

I Am Writing These Words to You – The Original Diaries, Będzin 1943

By: Chajka Klinger | Editor: Avihu Ronen
I Am Writing These Words to You reveals Chajka Klingers’ soul-searching response to the existential conflicts that plagued her while writing her diaries. Chajka Klinger (1917–1958), who was born into a Hasidic family, joined Hashomer Hatzair and became a major activist in the Jewish Fighting Organization (ŻOB) in Będzin. She was chosen by her comrades to survive and to document their history to ensure their memory. “Condemned to live,” she fulfilled her obligation to them by writing her diaries while in hiding in 1943. Chajka Klinger’s diaries are among the earliest comprehensive documents to reach the Jewish public outside of occupied Poland during the war. The notebooks provide a window into the activities of the Jewish youth movements during the Holocaust, and convey vastly important information about the ŻOB in Będzin and in Warsaw, the relationships between the underground organizations and the Judenrat, the response of the Jewish public to the extermination, and about Mordechai Anielewicz. Available for purchase in Yad Vashem’s online store.

Denunciation and Rescue – Dutch Society and the Holocaust

By: Pinchas Bar-Efrat
Denunciation and Rescue examines the attitude of the Dutch authorities toward the Jews during the Nazi occupation, the directors of the various government ministries, the ministers of the government-in-exile in London, and of Dutch society in general. Bar-Efrat probed thousands of files of postwar trials of war criminals in the Netherlands and found that the punishments imposed on those who denounced and betrayed Jews were often relatively lenient given the severity of their crimes. The author discusses the modus operandi of these war criminals and their motives for denouncing Jews, and activities of the Dutch police, and in contrast, the actions of the Dutch resistance and the Dutch individuals who concealed Jews and assisted them in obtaining false papers, or provided them with ration cards and money. Available for purchase in Yad Vashem’s online store.

Israel Slams ‘Baseless’ Holocaust Legislation in Poland, in the New York Times
New Israeli exhibit highlights power of photos in Holocaust , in Yahoo News
David Cesarani awarded posthumous honour, in the Jewish Chronicle
Pence wraps up Israel visit at Yad Vashem, in Ynet News
Jews who saved other Jews from Nazis faced dilemmas too difficult for Solomon, in the Times of Israel
102-year-old man who lost family in Holocaust meets nephew for the first time, in ABC News
Yad Vashem Uncovers 200,000 Previously Unknown Names of Hungarian Holocaust Victims, in the Times of Israel
Last letters from the Holocaust: Remembering the victims, in Deutsche Welle

Each person comes into the world with his or her own personality and set of skills, hopes and fears, dreams and desires – an identity. Encompassing the essence of that identity is a name, embodying not only the unique attributes of the individual, but their heritage and a connection to their past and future. The Nazis attempted to take millions of individuals and eliminate them entirely, replacing names with numbers. For seven decades, Yad Vashem has been investing great efforts to uncover the names of every victim of the Shoah. Today, with much of the relevant information found only in the memories of ever-aging Holocaust survivors and relatives, the passing of time is working against us. To date, 4,700,000 names of Shoah victims have been recorded in Yad Vashem’s Central Database of Shoah Victims’ Names. Partner with us in this urgent mission to collect the missing names.

You can now make a Tribute Gift in Memory of someone or in Honor of a special occasion or event.